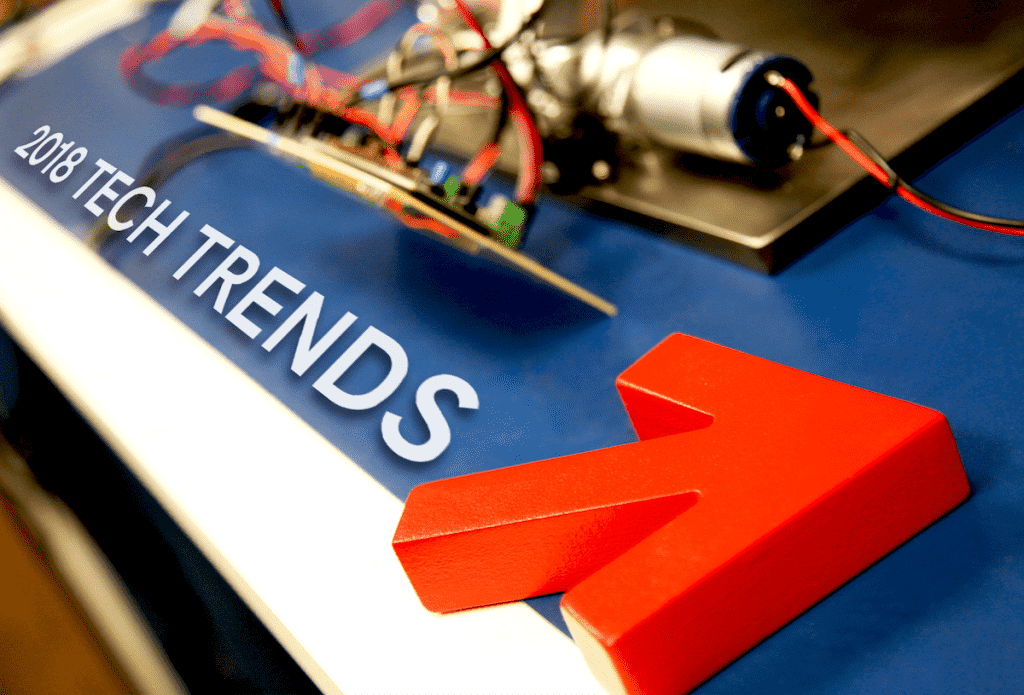 Artificial Intelligent is seeping into virtually every technology. Businesses are blending the Real and Virtual worlds together. The rapid development of the IoT ecosystem is accelerating the Rise of Smart Cities, Transportation Innovations and Mobile Device Usage. Continuous technology advancements will continue to reach new heights as new innovations and ideas come into fruition.

With 2017 ending, it is important to think about the technological trends that advanced this year and will influence the next.  Here is a list of just a few trends that defined 2017 and are expected to be developed even further in the coming year:

Artificial intelligence (AI) and machine learning have continued to get more advanced as time goes on. This year has seen advancements in areas such as natural language processing, deep learning and neural networks, as well as the ability to learn and predict future behaviors. Due to continued progress in these areas, businesses such as retail are expected to leverage this technology to improve efficiency and operating costs. Some publishers have already started using AI to increase the speed in which they can create their content. Hospitality businesses have considered using machine learning to predict what their customers want. Last year, the Hilton McLean in Virginia in partnership with IBM started using the hospitality industry’s first Watson enabled robot, called Connie, to cater to guests. Connie uses cognitive reasoning, natural language processing, and robotics to give the consumer personalized information, such as information about places to go in the surrounding area or information about the hotel. This year has also seen AI used in medical settings to help with areas such as searching for vulnerabilities in viruses and other diseases as well as assisting doctors in diagnosis. These are just a few areas where AI will continue to make advances in in the coming years.

Chatbots, such as Siri, Alexa and Cortana, are expected to implement enhancements for speech recognition and personalities to interact better with the user. They have been used this year by companies to improve customer experiences and for targeted engagement. In 2017, 88% of travel and hospitality companies have begun using AI for automation and this is expected to grow since Amazon is updating Alexa to be able to answer customer support calls and texts. Amazon’s goal is for their natural language processing to improve so that Alexa could answer questions in real-time more thoroughly than a human could. Conversational AI platforms are in development that will feature new paradigms of analytics and intelligence, which means that they are expected to be used more frequently in areas such as retail in 2018.

It is expected that Virtual Reality (VR) and Augmented Reality (AR) will create revenue of $150 billion by 2020. Currently, there are many different industries investing in VR and AR technology to increase sales. Businesses are looking to overlay graphics onto real world images, blending the real and virtual worlds together. For example, some apps, such as Home Harmony, have been made that allow the user to virtually preview a certain paint color in a room before physically committing to the color. VR and AR headsets are expected to get more improvements in 2018 due to this year’s improvements such as better display, better setup processes, and overall price reductions. There are also plans to improve the design of these headsets to make them better resemble regular eyeglasses to help make VR and AR become even more immersive.

In 2018, Internet of Things (IoT) is expected to take steps forward in conjunction with AI to enhance homes, businesses, cars, etc. and find solutions to specific problems. Smart cities may become more widespread in the future. Currently, San Diego has become one of the leaders by putting over 3,000 smart sensors on light poles to create an IoT network. These sensors can support applications such as gunshot detection, directing drivers to open parking spaces, air quality detection, and vehicle and pedestrian monitoring. This deployment started this year and is expected to finish by fall of 2018. Other cities are also taking steps to integrate more IoT devices, such as Miami, Copenhagen, Glasgow and Eindhoven, who are also working on adding smart lighting systems to their cities. Andrew Castello’s article “The Rise of Smart Cities: How IoT is Improving the Quality of Life in Cities” provides an overview of the advancements of smart cities.

One study shows that almost 70% of digital media engagement happens on mobile devices. Another study shows that about 41 million people only access the internet from their mobile devices instead of on a desktop computer or laptop. The increasing number of smartphone users has caused the development of mobile apps to become more important over the past few years. If a company doesn’t have their own mobile app, it’s necessary for them to have a website that’s optimized for mobile devices. If a site isn’t optimized in this way, they now show up lower in search engine searches. Therefore, the importance of this is expected to stay high or increase in 2018. Also, it’s expected that a few other mobile web related trends in 2018 will be natural language processing, secure pages and apps, and better usage of negative or white space.

The Consumer Federation of America predicted that electronic vehicle sales would increase in 2017 as compared to previous years, making 2017 a record year for EV sales. They also expected that this speed of growth would continue into 2018, which means that more demand for charging stations will occur.

Driverless cars are expected to continue making advancements in 2018 as well. Elon Musk, the CEO of Tesla, plans to have a Tesla drive itself from Los Angeles to New York City by the end of this year, with federal approval. Tesla’s goal is to have a fully self-driving car by the end of 2018. States, such as New York and California, have started allowing driverless cars to be tested on the streets. In California, having a backup driver in the car may be optional. Being able to test the cars in this way is viewed as “a clear path for the future deployment of autonomous vehicles.”, as said by Bernard Soriano, the deputy director of the California DMV. Baidu, a Chinese web services company, plans to produce a limited number of self-driving cars for a public shuttle service in China in 2018 with plans to mass produce these cars in 2021. Baidu received approval to test their cars in California as well.

Another potential innovation in transportation is the Hyperloop, a high-speed transportation system that is expected to revolutionize travel by moving “people and things at airline speeds for the price of a bus ticket.” This is done by moving a transportation pod through a tube at almost 700 miles per hour. The beta version is set to launch in 2018.

In 2017, we saw technology continue to make new advancements in many of the areas mentioned here. New ideas have been introduced that have caused progress to be made in many new ways and technology continues to become more present in our everyday lives. We can only expect 2018 and beyond to continue this trend and to reach new heights as new innovations and ideas come into fruition.

Which predicted tech trend do you think will make the most noise in 2018?