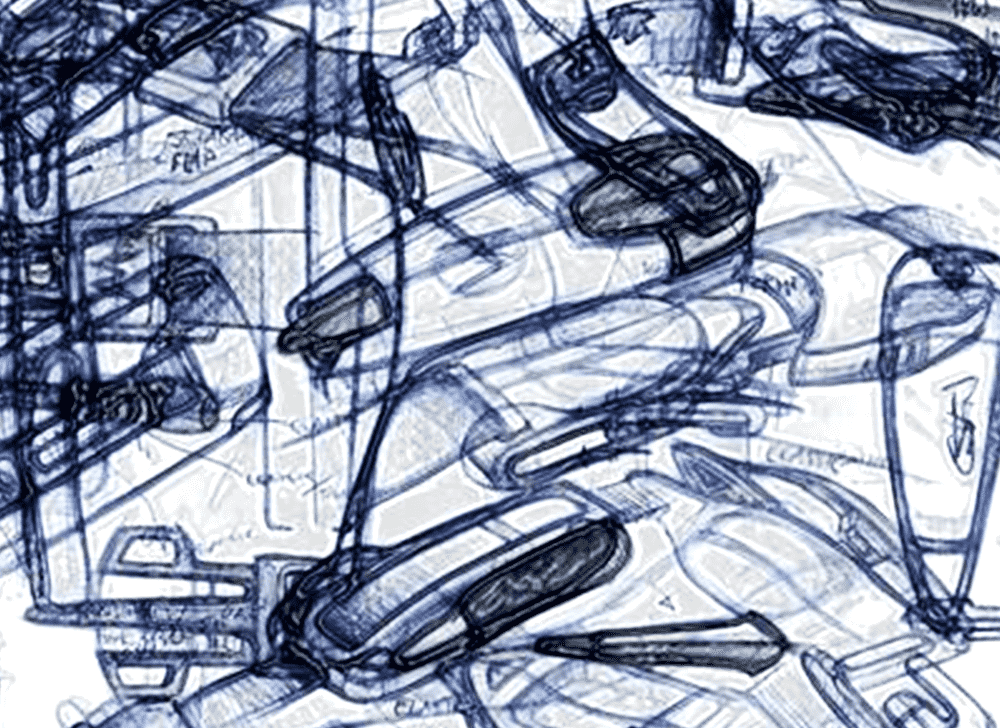 Sketching and the Industrial Design Process

There is a general lack of understanding for and/or appreciation of sketching during the typical industrial design process. Here’s why it’s important.

Last week a relatively recent graduate lamented online that he’d not had much luck establishing correspondence with potential employers to whom he’d submitted his portfolio. In response, I offered to critique his work. What I found is what I usually find when I critique a portfolio these days: a general lack of understanding for and/or appreciation of the typical Industrial Design process. In particular, there appears to me to be, in general, a casual disregard among newly minted design graduates for the importance of “sketching”; whether that means putting marks on a two-dimensional surface, fabricating simple foamcore mock-ups, or digitally compositing a variety of visual concepts.

What does Sketching have to do with the Industrial Design Process?

Students trying to enter the profession seem to me, based on this and previous experience, to be increasingly focused on getting that one idea they have in their head into a tight 2D Photoshop or 3D CAD rendering, as if this is what an Industrial Designer is supposed to do. Consequently, what I’ve been finding is that often there’s minimal exploration, little or no opportunity for “happy accidents” and almost no appreciation for what can be learned along the iterative path from the original spark of an idea to that highly desirable glossy presentation rendering.

Furthermore, being an Industrial Designer has increasingly become more about software application familiarity than it has with developing the underlying skills necessary to function effectively as a designer on a development team. Not that knowing how to use the software tools common to the profession isn’t important, but software applications aren’t the only tools at our disposal. To those who believe otherwise, good luck translating your CAD expertise to a conference room whiteboard during a brainstorming session.

So how did a virtual representation of a manufactured product go from being a waypoint to becoming the endpoint for so many young designers?

I don’t know, but I believe it may result from a number of factors, starting with job postings demanding an applicant have experience and expert level skills in both their field and in the employer’s software applications … for an entry-level position. Some job postings are so ludicrous to me they’re laughable, but to a graduate hunting work, those bullet points are serious employment requirements.

Another issue, in my opinion, is that an increasing number of student design projects seemingly focus on marketing and market research instead of problem-solving. I attended a student show at a well-regarded university a few weeks ago and between all the words and UX cartoon strips cluttering presentation boards I was lucky if I found a decent design somewhere. I was honestly elated when one of the student designs included parting lines and an indication they might have an idea of how their design could be manufactured. That’s just wrong.

Lastly, I suspect the Internet is influencing young designers to increasingly focus on pretty pictures instead of well-thought-out solutions. This is no surprise. Industrial design is still – in spite of efforts to change the perception – often seen as only the styling portion of a product’s development … by development teams everywhere. It’s not that aesthetics aren’t important – they are – but there’s more to the profession than styling, and that’s an issue with which the profession has been struggling for decades. And probably will struggle for another few, at least.

One could, however, argue that the Internet has actually elevated the Industrial Design profession by helping to educate the public about what it is we do. That may be true to some extent, but the world doesn’t visit Mashable or Gizmodo to gush over scratchy development sketches. People mostly want eye candy; fantasy products dreamt up in a perfect world filled with Unobtanium and manufacturing magic. Show the world a rough sketch of a brilliant idea (full of search lines and annotations representing some serious thought) and be ready for a billion plus blank stares. Show them a glossy KeyShot 3D rendering of a mediocre design and watch eyes light up.

Industrial designers have become technology’s alchemists; able to transmute engineering lead into marketing gold. Unfortunately, the effort that goes into achieving this transformation isn’t readily apparent to either the public or, it seems, to a fair number of design students; not the effort expended by professional designers who generate stacks of development sketches, nor the efforts of engineers who are instrumental in making a designer’s subjective vision tangible.

On top of all this I believe there is a key misunderstanding that should be rectified immediately: When an Industrial Designer is sketching, they’re not, hopefully, simply illustrating.

“Drawing is not about representation but about thinking. Trying to understand what you’re looking at … The brain sends a signal to the hand and the hand sends one back and there is an endless conversation between them.” – Milton Glaser

Years ago I used to try to explain in online design forums why being able to draw is so important; to get across to aspiring designers blinded by increasingly available 3D software applications that concept sketching isn’t simply documenting an idea you already have in your head, but about internal/external feedback; about the Industrial Design process. It’s why those of us in the design profession who pre-date the use of computers will suggest switching out drawing materials – from pen to charcoal to foamcore to whatever; even to CAD – because what we see in the output from each of them can spark new and valuable ideas.

This media switching can also be a way to efficiently focus one’s efforts. Shifting from pen or pencil over to charcoal, something former Chrysler design executive John Herlitz would have us do back when I was still in school, limits the amount of detail that can be rendered. This can be an effective way to visually step back and see the big design picture as well as develop some design process conversation skills. More than once I’ve hit on innovative solutions to thorny problems doing this.

To be sure, this technique isn’t limited to 2D. I’ve known designers who sketch in foamcore (with amazing results, I’d add). And there’s nothing that says you can’t do this digitally. For example, concept designer Scott Robertson uses custom brushes in Photoshop and replicators in Modo to generate high-level ideas before he selects the best and details them.

The point is, while Industrial Designers can illustrate, what we’re doing when we’re sketching is not illustration; it’s idea generation or “ideation”.

Ideation is the creative process of generating, developing, and communicating new ideas, where an idea is understood as a basic element of thought that can be either visual, concrete, or abstract.

Ideation comprises all stages of a thought cycle, from innovation, to development, to actualization.

As such, it is an essential part of the design process, both in education and practice.

Believing that drawing for a designer is nothing more than a means of documenting an aesthetic idea, and further believing a designer’s objective is to immediately create a single, highly detailed representation of a lone idea is to miss the point of what we often do. So while everyone is debating the merits of “Design Thinking”, I really wish there was an increased emphasis on “Design Sketching” (or maybe “Sketch Thinking”?), what it really is and how it benefits the development process, because that’s still, in my opinion, the primary skill that will get a recent graduate hired on as an Industrial Designer.

Are you in need of industrial design services?